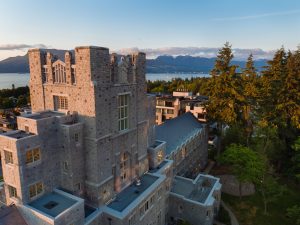 The Vancouver School of Economics (VSE) added a page to our website detailing the history of the school since its inception entitled VSE History: 100+ Years.

The piece talks about the schools beginning and how it can be traced back to the start of the University of British Columbia (UBC) in 1915. The following is a short excerpt from the piece:

“The first instructor at the school, an economist named Mack Eastman, was officially hired as an assistant professor in the history department. The addition of a full-time economics professor, Theodore Boggs came about in 1917.

Having studied at both Acadia and Yale universities, Boggs brought in the academic experience and broad perspective that a newborn institution needed. In the following years, Henry F. Angus, who would later become the intellectual architect of UBC’s commerce faculty, joined the department and Boggs, as head of it. He later introduced a program leading to a master’s degree in economics. Unfortunately, the expansive plans of these two visionaries were hindered by a global economic catastrophe: the stock market crash of October 1929 and the ensuing ten-year Great Depression.”

To continue reading more about the history of the VSE please click here.