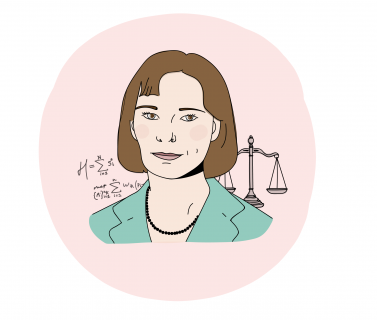 Jaw-dropping evidence found in the eleventh hour. Emotional outbursts on the stand. The unrivalled theatrics of the smooth-talking lawyer’s closing argument.

These kinds of courtroom antics play out regularly on T.V. legal dramas, but Lauren Stiroh’s experience as an expert witness in court is much different from what most viewers have become accustomed to watching.

“There are few surprises,” said Stiroh, an antitrust economist and alumna of the University of British Columbia. “The reality is that lawyers stumble over their words, PowerPoint presentations don’t work properly, and there are long pauses while lawyers search for the right piece of paper in a box of documents. There is also a long period of discovery, in which both sides of a case are privy to everything that will be presented by the other side in court.”

Testifying in court has become a regular part of Stiroh’s career as a professional economist, which she calls a happy accident.

Entering her first-year of university, Stiroh’s older sister had warned her not to take an economics course, so she pursued philosophy. Not connecting with the material, Stiroh decided to skip out one day and join her roommate in an economics lecture.

From there, she was hooked.

“The combination of studying human behaviour and explaining it with math instantly appealed to me,” said Stiroh, who then took all the economics courses she could, finishing all of her undergraduate requirements in three years.

Stiroh came to UBC in the early 90’s from Western University in Ontario, on the advice of a professor and to satisfy a curiousity for life on Canada’s West Coast.

“I had originally only looked at Ontario schools,” she said. “But UBC had a stellar reputation.”

While at UBC, Stiroh became more academically invested, becoming a teaching assistant and forging close ties with her peers and professors.

“The faculty and the graduate students at UBC were really connected,” she said. “There were no firm lines between grad students and the faculty. I really enjoyed that aspect of the program.”

Upon graduating, a PhD acceptance letter from Harvard was an offer she couldn’t refuse. While there, she focused on development economics. Her PhD work culminated in six months in Bogota, Colombia, working for the government’s planning department studying trade policies and their effect on income distribution.

After finishing her PhD, Stiroh was recruited by NERA Economic Consulting, where she has worked for the past 21 years. The global firm provides third party expert research, reports and policy recommendations to governments, law firms and corporations worldwide.

“I focus on antitrust litigation and competitive impact studies.  When a company is sued for violating antitrust laws, I will do a market investigation to see, for example, what would have happened to prices if the defendant had acted differently,” said Stiroh, who has testified in more than a dozen cases. “The economic analysis is exactly the kind of applied economics taught in the classroom.”

In one particular high-profile case, O’Bannon v. NCAA, Stiroh was an expert witness for the defence. In a class action lawsuit, college football and basketball players sued the National College Athletic Association (NCAA), arguing the organization’s rules restricting them from profiting from their own names, images or likenesses violated antitrust laws.

Stiroh’s testimony was related to whether the NCAA rules at issue had an impact on markets where student-athletes could have licensed their images and whether there was a reasonable measure of financial loss to the student athletes from foregone licensing opportunities.

“I could be agnostic about whether the student athletes should be paid, but in terms of antitrust economics, I didn’t find an anticompetitive impact on the market,” she said.

According to a Pittsburgh newspaper, Stiroh’s testimony was “the biggest bone of contention” between both sides. The judge eventually ruled the NCAA had violated the law, but found that the plaintiffs had not established an anticompetitive impact in markets where student athletes could potentially license their images if the NCAA rules were different.

Because part of the ruling was overturned by a higher court, the case resulted in no additional compensation to student athletes from image licensing. It did, however, result in raising the cap on the amount that student athletes could receive in financial aid to cover the full cost of attendance at their respective institutions.

Stiroh said being an expert witness can be challenging, but giving live testimony can also be really rewarding.

“I get to see whether a judge or a jury is following what I’m saying as I translate the data,” she said. “It’s my job to explain economics to people who may not have a background in it and have them make sense of the various economic models we run. It’s meaningful to their decisions.”

Stiroh believes she is one of very few women who testifies regularly as an antitrust expert. She was recently named chair of NERA’s Global Antitrust and Competition Practice, a career high point in an industry that is still largely male-dominated.

“When I first started my career, being the only woman at a meeting or at the table wasn’t unusual to me,” she said. “Economics programs in graduate school were also predominantly male.  But, the longer my career has gone on, the more the shortfall in women doing this job has bothered me.”

To help close the gap and build a stronger professional network, Stiroh and her colleagues started a dinner for women in antitrust ten years ago as part of an annual meeting for antitrust economists and lawyers in Washington, D.C.

“Our first year, we had 13 women at the dinner and we fit around a single table,” said Stiroh. “At our tenth anniversary this year, more than 40 of us were spread out at four or five different tables.”

Away from the office

When Stiroh’s not working or testifying, she finds enjoyment in taking ballet classes, rediscovering a love of dance from her childhood.

And while she has not been back to UBC or Vancouver since graduating, she said she is long overdue for a visit. This year came with even more motivation; her nephew started this past fall at the UBC Sauder School of Business.