Merit-based grants are a government’s best bet for providing effective student aid for long-term economic growth – increasing both welfare (measured in terms of long-term well-being outcomes) and efficiency, according to a new joint study from the University of British Columbia, Queen’s, Princeton and Yale. The study focuses on current education policy in the United States, and finds that the current system of grants and loans has significant long-term value. 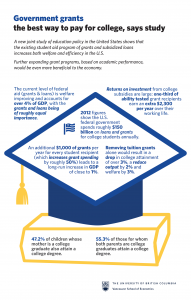 Figures from 2012 show the U.S. federal government spends around $150 billion on grants and loans annually. Given such a sizable investment, the researchers wanted to test the effectiveness of such spending and found the current amount of federal aid is extremely valuable.

“We found that a $1000 increase in grants per year for every student, which corresponds to roughly a 50 per cent increase on average, would lead to a long-run gain in GDP of close to one per cent,” said study co-author Giovanni Gallipoli, an associate professor at the Vancouver School of Economics at UBC. “This is a comparatively large return on investment.”

The study finds grants remain the most effective at improving the country’s overall welfare, more so than loans or tax cuts. The study’s economic modelling shows that one third of ability-tested grant recipients make an extra $2,300 per year in earnings over their entire careers, confirming the high return per dollar spent.

The researchers say there will be additional benefits if grant programs are further expanded, especially those based on academic performance and merit.

The researchers argue ability-tested grants work best because they prioritize those students who are likely to have the highest returns to college attendance and who are most likely to complete a college education, irrespective of family and social background. These students have their tuition funded, based on grades and test scores, deriving large gains from their degree in the labour market.

The researchers do recognize that this method may have potential flaws because students from well-off families could still have an advantage to receive grants based on performance. These students would have greater access to different supports or resources, like tutors or mentors, to advance their cognitive skills that are simply not available to working class children with the same or similar abilities. For this reason, the researchers do see a significant benefit in keeping a portion of federal aid based on need intact. 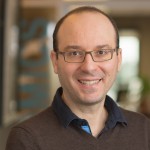 “This approach also benefits non-recipients, through overall economic growth,” said Gallipoli. “One key finding of the study is that expanding post-secondary education for any given generation reduces the cost of human capital accumulation for future generations to come.”

Removing tuition grants completely would result in a drop in college attainment of more than three percentage points, and reduce output and welfare by two and three per cent respectively.

“Without grants, the student body would possess lower skills, and the system would become much more reliant on parental wealth and transfers,” said Gallipoli.

Gallipoli also said the study’s findings could have implications for education policy outside of the U.S., including here in Canada.

“The U.S. system, through a mix of grants and subsidized loans, funds education for students from very poor backgrounds quite well, provided they do well academically,” he said. “In Canada, similar funding doesn’t really exist, nor is it as readily available or as expansive to such a group.”

The study, Education Policy and Intergenerational Transfers in Equilibrium, was published in December 2019 in The Journal of Political Economy. Gallipoli’s co-authors include Brant Abbott at Queen’s University, Giovanni Violante at Princeton University, and Costas Meghir at Yale University.