Beto O’Rourke’s run for the United States Senate energized many Americans, including Vancouver School of Economics Professor Jamie McCasland. While on leave from the VSE, she volunteered her time as an Economic Policy Advisor for the O’Rourke campaign, spending several months in Texas in the run-up to the midterm elections held in November 2018.

While O’Rourke lost to the Republican incumbent Senator Ted Cruz, he did receive over 4 million votes, the highest number of votes for any Democratic candidate in a Texas election. Some political observers speculate he will run for president in 2020.

McCasland talks about her experience in this Q&A.

What made you initially want to volunteer for O’Rourke’s campaign? 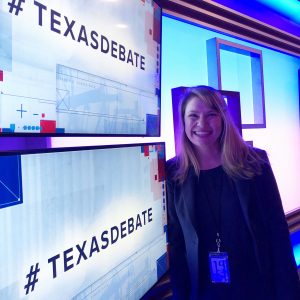 Prof. McCasland at the Texas Debate in San Antonio.

I got involved because I was looking for a campaign to work on for the midterms. I’m an American and I felt a responsibility to participate. I was really inspired by what I had seen and read about Beto O’Rourke in the news. I knew people already working on his campaign, and I lived in Texas as a child. I saw an opportunity to contribute there.

As a Policy Advisor, you’re essentially a knowledge resource for the candidate. I researched existing policies and legislation, and analyzed their impacts and costs. Based on the evidence, I would make recommendations for the candidate’s own policy proposals and how these policies could work if elected to office. A big part of an advisor’s role is to distill massive amounts of information into briefings that are more digestible for the candidate. I also provided real-time information to his team if there were policy developments in Washington or elsewhere. In addition, I had the opportunity to work on some non-economics issues, including helping to organize town halls and block walking in the weeks immediately preceding the election.

What are some policy examples you covered while on the campaign?

One of the policies I looked at closely was the candidate’s support of raising the national minimum wage to $15. I looked at how a minimum wage increase could affect inflation and why it was ultimately not a concern that overwhelms the large benefits for working class Americans of increasing it. I also wrote briefs explaining some of the reasons why wages in the absence of adjustments to minimum wage policy are so low, including the idea that firms have wage setting power over workers; unions have deteriorated in the U.S. and corporations are not being pursued for antitrust violations associated with monopolizing labor markets. Other examples of policies I analyzed include the Trump tax plan and what it means for the U.S. national debt, and how trade works in binational communities as the renegotiation of NAFTA made news during the campaign.

What was your experience like interacting with and working for Beto O’Rourke?

He’s awesome, and a really normal guy. I think I was lucky because this was my first time working for any political candidate, and this particular candidate is committed to evidence-based policy and having a solid command of economic policy issues. He was adept at understanding complex policy issues and translating them in ways that created a message for voters focused on values. I was so impressed and inspired. It was also nerve-racking the first time I heard him use information I had provided in public, but ultimately professionally rewarding to see him rely on my expertise.

How do you feel about the election outcome?

I feel wonderful. I think the movement for progressive politics and representation in Texas was never about one candidate. The campaign accomplished so much and created a modern institutional base of grassroots organizing in Texas. It was great to work on an excited team of staff and volunteers who believed in a vision of Texas that is more just and more inclusive. I also think Beto O’Rourke inspired people around the U.S. in a way that was really meaningful.