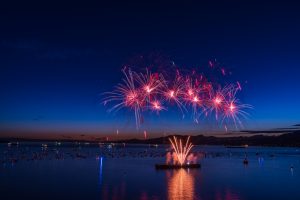 Vancouver’s Honda Celebration of Lights, an annual summer fireworks festival, costs local taxpayers $800,000 each year, according to new analysis by a group of UBC students.

As part of a class project on microeconomic policy, ECON210 students Debbie Liang, Gurshan Dhaliwal, Faith Marere, Xinhao Guo, Jiwon Lee and Rocky Xie analyzed the costs and benefits of the festival. Their research focused on the net government revenue and allocative efficiency of the festival, which is subsidized in part by the city of Vancouver and the provincial government.

The group gathered information from stakeholders including event organizers BrandLive, the city of Vancouver, and the Vancouver Police Department. They found that the festival cost the city $800,000, proposing that this is a consequential sum that could be used more effectively.

The students found that while stakeholders suggest the event stimulates spending, it is difficult to quantify the benefits of increased tourism and economic activity in the area. Simultaneously, the fireworks create negative externalities—unpriced third-party costs—such as smoke and noise pollution.

The students suggest that public funding for the Celebration of Lights, now in its 27th consecutive year, should be reconsidered in favour of alternate investments such as a five percent annual interest bond.

They recently published an op-ed about their work in The Breaker.