The following criteria are considered in determining the award recipient: 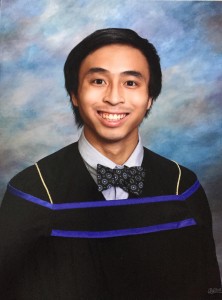 “I’m very very humbled,” says Viet of the accolades. “To me, these awards aren’t just for me. They are a testament to the community we were able to foster in Economics. I’m very thankful to have been afforded the opportunity to work on VSEUS for the past few years and I’m excited about what they can do going forward.”

Professor Hugh Neary, Associate Director of the VSE, has worked closely with Viet during his studies at UBC. “Viet has a very strong record as an undergraduate of extra-curricular activities,” says Hugh. “He is very much a mover and shaker in student affairs and in organizing groups for social purposes. He devotes tremendous energy to these matters and does so from very strong sources of internal motivation.”

Dr. Neary continues, “Let me mention just two of the many examples of his achievements:

When asked why he devotes so much time and effort to volunteer work for the UBC community, Viet explains, “I take an interest in student activities because I want to ensure every students who spend their career at UBC can feel appreciated, involved and have the environment and resources to be the best version of themselves, whether it be to produce research, turning ideas into realities, or build a career.”