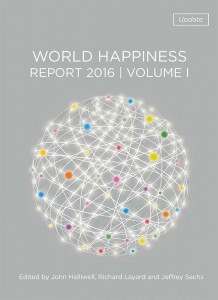 Professor Emeritus John Helliwell, whose research includes ground-breaking studies into the effect of happiness on social and economic well-being, is a co-editor of the World Happiness Report 2016 Update. The report, which ranks 156 countries by their happiness levels, was released in Rome in advance of UN World Happiness Day, March 20th. The widespread interest in the World Happiness Reports, of which this is the fourth, reflects growing global interest in using happiness and subjective well-being as primary indicators of the quality of human development. Because of this growing interest, many governments, communities and organizations are using happiness data, and the results of subjective well-being research, to enable policies that support better lives.

This year, for the first time, the World Happiness Report gives a special role to the measurement and consequences of inequality in the distribution of well-being among countries and regions. In previous reports the editors have argued that happiness provides a better indicator of human welfare than do income, poverty, education, health and good government measured separately. In a parallel way, they now argue that the inequality of well-being provides a broader measure of inequality. They find that people are happier living in societies where there is less inequality of happiness. They also find that happiness inequality has increased significantly (comparing 2012-2015 to 2005-2011) in most countries, in almost all global regions, and for the population of the world as a whole.

The World Happiness Report 2016 Update and supplemental files are available for download for free at this link.