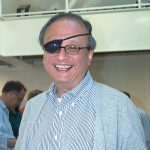 It is with deep sadness that we announce the passing of Professor Samuel Pao San Ho, who died peacefully in Vancouver on July 20, 2016. The BC flag at Main Mall and Agronomy Road on campus will be lowered in Dr. Ho’s memory on Monday, August 15, 2016. Please click here for details.

Born in Tianjin on November 19, 1936, Sam spent his childhood in China until moving to the United States with his family in 1949. Sam was fortunate to attend Oakwood Friends School in Poughkeepsie, New York, before receiving his undergraduate degree in electrical engineering from Princeton and his PhD in economics from Yale University. After receiving his doctorate, Sam taught at Yale and joined the university’s Economic Growth before becoming a professor in the Department of Economics at the University of British Columbia. Sam enjoyed a rewarding and productive career at UBC serving as head of the Department of Economics from 1985 to 1989 and as director of the Centre for Chinese Research from 1996 to 1999.

Throughout his life, Sam inspired many people with his good humor, equanimity, wisdom, and warmth; he retained these qualities through his brief illness and until the very end. A celebration of his life will be held in Vancouver later in the summer. Condolences may be expressed at http://mbfunerals.com/vancouver/condolences/. If friends would like to make a donation in his memory, the family ask them to consider the Vancouver Hospice Society or Doctors Without Borders.