Why Gender Matters in Economics 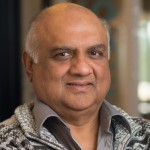 Ever wondered why most CEO’s are men? Or why the percentage of women in parliaments is still below 40% in almost every country around the world? Have you pondered about whether women are actually more adverse to economic risk than men? In his 2015 PROSE Award-winning book, Why Gender Matters in Economics, author VSE Professor Mukesh Eswaran explores these questions and the differences in economic behavior between men and women.

Based on many years of research, Prof. Eswaran draws an economic analysis of markets and policies particularly affecting women. As one advances through the book’s pages one becomes more literate about economic discrimination, pay and employment equity, economics of marriage and fertility, poverty, taxation, income security and pension policies, and the historical perspectives on gender behavior, among other topics. Despite the importance of economic gender inequality, no previous text has so compellingly compiled and analyzed such an array of scholarly articles on gender economics. Although written for an economics course, its comprehensive explanations and well-defined end of the chapter summaries make it an interesting and informative read for non-economists too.

Recent research has shown that women tend to be averse to competition, at least in competition with men. In a scenario where men and women with the same abilities are competing, women might stay away from the trade because they are averse to the nature of the competition. Hence missing out opportunities and good positions. This has been offered as an explanation of why there are not so many women in CEO positions. If that is the case, and there has been a reasonable amount of evidence for it, then the manner in which the top leaders are chosen needs to be changed.

The process of socialization is also very relevant in economic behavior. There are some people who argue that evolution is more or less irrelevant and I find this a somewhat extreme position as we cannot deny that we are all partly the product of evolution. But socialization is incredibly important: as shown in recent economic research, the same sort of people brought up in a different environment might take differing economic decisions. Hence it is wrong to attribute too much to nature.

Because the differences are quite considerable and we need to understand why they arise. We like to believe that we live in a ‘just society’ where everyone has access to the same opportunities but this is not really the case. If differences in economic outcomes are due to choice then they are not so important for a researcher to study. If, however, they are due to differences in access to opportunities, then one needs to understand what these things are and how we can set them right. The only way to do so is by first understanding what is happening – or how do you set policy otherwise?

Becoming aware is a very powerful tool. Without awareness you cannot even ask the question of how to change things. People need to realize that most of the time we behave the way we do because we have been conditioned to do so, and that is possible for us to behave differently. This shift in paradigms is not going to happen until more of the research conducted becomes accessible to a much greater audience.

Yes, the positive changes in attitudes towards women working in the labor market are an example of this. Recent research has shown differences in labor force participation between first and second generations of immigrant women. Even though the second generation is operating in the same economic environment and all the institutions are the same they behave a bit differently. The culture they have been exposed to at home was different.

Differences in treatment could be due to many varying reasons. It could be that men are on average more educated, although this is no longer true for some countries, or that men have more market experience. More experience could mean more productivity and in a market economy, more productivity gets paid more. It could also be that men and women have different jobs with retributions dependent on demand. Since all these possibilities might be contributing to the gender gap we need to be careful to account for all these differences and then look at what is left over. If there is still something left over then one potential explanation for that might be discrimination. We cannot even be sure that all the difference in treatment is due to it because there might be some other external factor that we are missing in our model. One explanation for it that has been known for decades is Becker’s ‘discrimination by taste’. However, he compellingly showed that discrimination by taste cannot last as long as there is competition. Differently, statistical discrimination, a type of discrimination that comes close to stereotyping, refers to the phenomenon of using group averages as determinant factors when making decision about who to hire. Unfortunately statistical discrimination does not get wiped out with competition.

Despite antidiscrimination laws being already in place there are still many ways in which employers can discriminate a particular group, not just women. One way of limiting discrimination is by making redundant information that is not relevant to the position. For example, when you are hiring someone, the fact of whether she is married or not is none of the employers’ business. Hence we need to suppress that information.

Quotas are a very contentious solution. Because once you use quotas there might be someone from the protected group that gets a job even though there is a more qualified person for that position outside that group. But I think in the case of historical discrimination, like racial discrimination in the US, it might pay to implement quotas to help the discriminated group. Although there is recent evidence showing that the average quality of female politicians is not higher just because there are quotas, there are other studies showing that quotas might bring out highly qualified woman who might have not participated at all in politics in the absence of quotas.

It is much more subtle than just increasing the presence of women in policy making bodies. A study on discrimination was done on Spain regarding applicants to law schools where they studied the differences in selected students depending on the gender composition of the committees. They showed that committees that had more women tended to select more men. One would think that it would be easy to level the play field by increasing the number of women in the committees but this study showed that this is in fact wrong. Gender discrimination is very complex.

I think coed schools are good because they help people learn to interact with others. What Nolen and Booth are highlighting, however, is the importance of the different kind of socialization that goes on in coed and single sex schools. The fact that girls from single sex schools behave differently kind of alerts us that there is something going on in coed schools. Some of it is very good, but some of it might not be so great so you need to try and design policies to change those effects.