Lending to the Borrower from Hell: New Book by Mauricio Drelichman 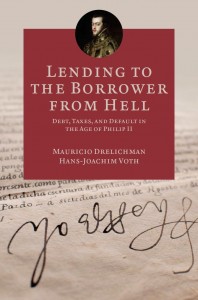 Why do lenders time and again loan money to sovereign borrowers who promptly go bankrupt? When can this type of lending work? A fascinating story of finance and empire, Lending to the Borrower from Hell offers an intelligent model for keeping economies safe in times of sovereign debt crises and defaults. The book is co-authored by Mauricio Drelichman, an associate professor in the Vancouver School of Economics and a fellow in the Institutions, Organizations, and Growth program of the Canadian Institute for Advanced Research. Drelichman’s main research area is economic history, with particular emphasis on Early Modern Spain. Originally from Buenos Aires, Argentina, he obtained his Ph.D. from Northwestern University in Evanston, Illinois, USA.

As the United States and many European nations struggle with mountains of debt, historical precedents can offer valuable insights. Lending to the Borrower from Hell looks at one famous case – the debts and defaults of Philip II of Spain. Ruling over one of the largest and most powerful empires in history, King Philip defaulted four times. Yet he never lost access to capital markets and could borrow again within a year or two of each default. Exploring the shrewd reasoning of the lenders who continued to offer money, Drelichman and his co-author, Hans-Joachim Both, analyze the lessons from this important historical example.

Using detailed new evidence collected from sixteenth-century archives, Drelichman and Voth provide powerful evidence that in the right situations, lenders not only survive despite defaults–they thrive. Drelichman and Voth also demonstrate that debt markets cope well, despite massive fluctuations in expenditure and revenue, when lending functions like insurance. The authors unearth unique sixteenth-century loan contracts that offered highly effective risk sharing between the king and his lenders, with payment obligations reduced in bad times. For information on purchasing Lending to the Borrower from Hell: http://press.princeton.edu/titles/10084.html

Q: What surprised you most from this research?

A: The depth and complexity of sixteenth century contracts was certainly our most surprising discovery. We are sitting in the year 1550. Double-entry bookkeeping has barely been invented, compound interest is also very new, and many of the financial tools we are used to working with are centuries into the future. And yet we found contracts that allowed for an unprecedented degree of insurance and risk sharing between borrowers and lenders – a degree which is rarely seen even today. Some of the clauses in these contracts allowed for the automatic rescheduling of payments, and even for the conversion of a cash payment into a long-term bond, when certain external conditions were fulfilled. In modern corporate finance, these instruments are called “contingent-convertible” bonds (CoCos for short), and are a relatively recent innovation. Yet we find them fully developed and extensively used in sixteenth-century Spain. We were really stunned at the level of financial sophistication evident in the dealings between the king and his bankers.

Q: Why did lenders continue to support the king despite his repeated defaults?

A: It is common to think of defaults as catastrophic events that ruin the lenders affected by them. In our book, we show that this was not the case. Defaults were actually part of a system that allowed borrowers and lenders to spread the risk of unforeseen negative events. In normal times, the bankers charged the king an interest rate that exceeded the normal rate between merchants. We can think of this extra cost as an insurance premium. If something bad happened – for example, the king lost a war, or the ships laden with treasure from the Americas failed to arrive – the king defaulted. We can think of defaults as an insurance claim coming due. Bankers were not ruined – they collected the premia in good times, and they paid on their insurance claims (by not collecting on their loans) in bad times. In the book, we demonstrate how the king only defaulted in very bad times; he never abused his position by “cheating” on the bankers because the sovereign debt system was too valuable to him. We also show that the losses suffered by bankers during default episodes were not large. The king eventually paid back most of his outstanding debt, and the bankers never punished him by raising interest rates or refusing him access to new loans.

Q: What insights can we gain on modern lending practices by looking at historical cases such as King Philip?

A: Modern sovereign debt scholarship holds that it is not feasible to write contingent sovereign debt contracts. The reason given is that such contracts would be difficult to enforce; countries could “fudge” the numbers to make a fiscal situation appear worse than it actually is, and thus justify as many defaults as they wanted. The experience of Argentina, which in the last ten years has consistently published figures that clearly underreport inflation for political reasons, is an example of this. This is unfortunate because contingent sovereign debt contracts could greatly ease the financial strain that governments experience during recessions, and hence mitigate the austerity and unemployment consequences. What we show in the book is that Philip II and his bankers had effectively solved the problem by 1550. Today the circumstances are obviously not the same. However, if a handful of clever bankers managed to write contracts that effectively spread fiscal risks while keeping a sovereign accountable in the age of the galleon and the messenger on horseback, surely the age of jet travel and the internet can come up with a solution as well?

Q: You’ve spent so much time studying the character of King Philip II of Spain, you must feel like you know him personally to a degree. If he read your book, what do you think he’d say about it?

A: Probably “What else is new?” Historians spend a lot of time painstakingly reconstructing what must have been obvious to decision-makers at the time. I certainly hope he wouldn’t tell me I got it all wrong!