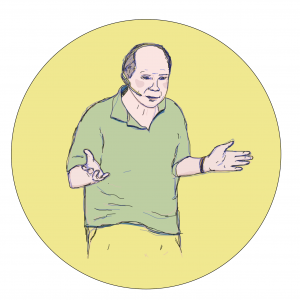 A motorcycle crash changed the career trajectory of Dr. John Fountain more than 50 years ago.

In 1967, Fountain was riding his bike over the Burrard Bridge in Vancouver when he was struck by a motorist. Dragged by the car several hundred feet, Fountain’s hands got stuck under the driver’s front wheel, leaving them both badly injured and in need of surgery with skin grafts.

“The pain was unbelievable,” recalls Fountain. “I was lucky to be alive.”

Before the accident, Fountain had taken a few general arts and sciences classes at UBC, but dropped out to work at a gas station to make money, and to pursue a trade in woodworking.

“The accident meant I couldn’t use my hands anymore,” says Fountain. “I had to go back to university to use my head.”

Fountain re-enrolled at UBC and majored in economics. It was here where he found healthy competition among a close cohort of fellow students and summer work with Professor John Helliwell, now retired, who encouraged him to pursue graduate school.

Fountain graduated in 1969 as part of the first Honours class in the department. He also became one of the first economics student to receive the University Medal in Arts and Sciences that same year. At the time of the award ceremony, Fountain was in the hospital for skin grafts, but the hospital let him out to take part. He can be seen in a photograph at the time with the bandages still on his hands. 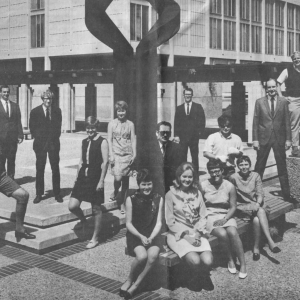 Fountain in 1969 with his bandaged hands (far right, standing up)

Fountain would go on to obtain his PhD from Stanford University in California. From there, he became an academic and taught at Queen’s University for a short time before moving to New Zealand. He then taught at the University of Canterbury in Christchurch for more than thirty years.

“Economics challenges you to dig deep and ask big questions,” Fountain says. “The classroom is an exciting environment to work in. Teaching for me is at its most rewarding when my students come together to create lively discussions on policy or research.”

“UBC has changed immensely since I was a student,” he says. “But I love coming back here. It’s where I grew up. Vancouver will always be special to me.”

Fountain graduated from UBC in 1969 with a BA Honours degree in economics. He grew up in Dunbar near UBC. He lives in Mapua, New Zealand.