Roshni Pendse grew up around planes, receiving her pilot’s license before she learned how to drive. Through her work terms in the Arts Co-op Program, she has now seen the aviation industry from the inside out, first as an administrative assistant for the Civil Aviation Directorate of Transport Canada, and then as a summer analyst for Intervistas. 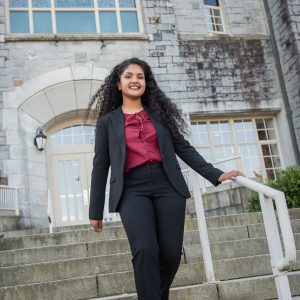 After she didn’t land the public sector job that she had wanted, Pendse secured a position at private consulting firm Intervistas through the power of networking.

“I initially thought I wasn’t going to like it at all, and I ended up loving it,” she explains. “I liked it to the point where I would do that work after I graduate.”

The job was not what she expected going into it, and ultimately changed her philosophy on the best way to approach the co-op program. Initially, Pendse had planned on trying to amass a year’s worth of targeted experience across her co-op placements by completing all of her work terms in related, public sector jobs. However, she found that she learned a lot from working in multiple sectors.

“I think what’s important about a full, holistic Arts Co-op experience is trying a bunch of different things,” Pendse explains.

Going into her second co-op term, she found herself able to approach the work with more confidence in her contributions as a team member.

“It was really cool to be able to bring prior knowledge into it, and have good industry conversations with coworkers,” she said. “I had never felt like such a real employee.”

In her position, Pendse worked on economic impact studies, which included working on surveys, building databases, and cleaning data, as well as analysis and report writing. She was also included on client calls, where her input was valued.

“The fact that my coworkers trusted me enough to be on these calls and liaise with the client was very cool for me, to actually work with clients to some extent,” she said.

“I always thought that economics was going to be dry, boring, all about numbers and sitting at your computer all day, but there’s such a human component if you’re in the right industry.”