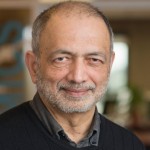 Dr. Kotwal, the first Director of the Bachelor of International Economics program, taught at UBC for nearly 40 years. He will be missed greatly by faculty, staff, students, and alumni.

You can read the obit, originally published in Ideas for India, in its entirety below.

Ashok Yeshwant Kotwal was born on 11 July 1945, in Mumbai, India, the youngest of four children. His father Yeshwant Kotwal was an Engineer and his mother, Indira Dikshit Kotwal, raised the family. He attended Shardashram Primary School and King George High School and like many middle-class boys of his generation, he dreamed of becoming an Indian cricket player, but settled for engineering instead.

In 1966, he graduated from the Indian Institute of Technology (IIT) with a degree in electrical engineering and worked for a year at IBM in India. He then followed the well-trodden path of IIT grads to the US. He landed in Idaho in the middle of winter 1968 to pursue a master’s in electrical engineering, carrying only a bag and wearing a linen suit. Standing at a bus stop, in a snowstorm, hopping from one foot to the other to reduce the stabbing pain through his thin leather shoes, he had some early doubts. But he warmed up enough to soon make an instantly close friend, Truus van der Sluys, who had come from the Netherlands to study and improve her English. They remained best friends until Truus’ studies ended, and she left back home. For Ashok’s part, the fact that he had to tell Truus everything that happened to him, every single evening, for many hours at a time, told him what he needed to do. He proposed to her, and they were married at the ‘Cathedral of the Pines’ in Rindge New Hampshire.

The only condition a couple needed to meet to marry at the Cathedral was a belief in God, it did not matter which God. Ashok was not sure about that, but as an Indian, and presumed to be Hindu, he was welcomed without question. Truus, a staunch atheist, when grilled on her God, honestly answered with doubts. The couple were angrily turned away by the celebrant. But undaunted, and buoyed by Ashok’s conviction that the celebrant exhibited more than a few signs of dementia, they returned the next day to try again. The same celebrant happily married them, and so started a wonderful partnership that would last over 50 years.

In 1970, they moved to Lowell, Massachusetts and Ashok joined ‘Graphic Systems’, a startup working on early word processors. Even though he enjoyed the work, he was more interested in social problems. His sister Sudha (15 years his senior) spent her life working in the socialist organisation ‘Rashtra Seva Dal’. Sudha’s husband, Anoo (Sadanand) Varde, who would eventually become Maharashtra’s Education Minister in the Socialist Party, was the only person Ashok described as his “hero”. Unusually, for a politician, Anoo was an Economics professor, and his understanding of Economics helped him to work selflessly to improve the lives of the poor. He, and Ashok after him, never hesitated to speak the truth. Anoo was jailed by the British government for two years during the freedom struggle, and jailed again by the Indian government, for a year and a half, during Indira Gandhi’s ‘Emergency’. Later in life, he resigned his life-long membership of the party, to speak freely of policy that was not in sync with the party line.

Ashok was inspired by Anoo to study Economics, and to follow the truth. He was driven to understand the most basic of questions: Why are so many countries so desperately poor? This question was to define his career. He started his Ph.D. at Boston University in 1977, but was soon turned off by development economics which, at the time, was more interested in dispensing advice than understanding. He instead gravitated to working with Professor Michael Manove, an eclectic and creative thinker, who grew to be one of Ashok’s closest friends. Though he knew little of development economics, Michael knew a good idea when he heard one, and luckily Ashok had many. Ashok graduated in 1981, receiving job offers from prestigious US Economics schools. He turned them down to come to UBC (University of British Columbia) because Vancouver’s greenness (and rain) reminded Truus of Holland. They settled and started a family, with both of their daughters, Natasha (Shasha) and Shanu, soon born and growing up in their South Burnaby home.

Upon arriving in the Economics Department he teamed up with another junior hire, Mukesh Eswaran, and they set to writing a stream of classic papers in development economics of the 1980s and 1990s. To say these transformed the field, would be an overstatement. The field was already starting to move in a strongly empirical direction, and these were theoretical. But they provided the conceptual frameworks that applied the emerging tools of contract theory to a developing country context. These papers drew on direct experiences amongst the rural poor. The papers were real, and they tackled real questions.

His research was influential, but arguably more impact came from Ashok’s editorial work. Ashok was a founder of Ideas for India (I4I), and remained its Editor-in-Chief to the end of his life. I4I – an online portal aimed at discussion of policy – focussed on Indian problems, based on data and rigorous analysis, reflected him. Its articles are read over a million times annually, and its influence amongst Indian policymakers is immense. Surprisingly, Ashok never directly worked on policy, or advised governments on anything. But the success of this initiative was due in no small part to his values. He cared about India immensely, was unrelentingly curious, and was only interested in unvarnished, apolitical truth.

Ashok was a Professor in the Vancouver School of Economics (formerly Department of Economics) for nearly 40 years. He headed the Department from 1995 to 2000, a dire period of lean resources at UBC, and cuts across the Faculty of Arts. He managed to hold together a world class group of economists, who were highly tempted south of the border, on a shoe-string budget. He emphasised collegiality, promised improvements when finances looked up, and convinced a cash-strapped Faculty that the School of Economics was needed, valuable, and should be protected.

Ashok was the intellectual force behind the Bachelor of International Economics (BIE) degree, and its first Director. His vision was to create a programme founded on economic principles and methodology, aimed at training the next generation of global leaders. It has grown to be one of the most popular and successful programmes at the university, attracting thousands of applicants from all over the world to its 100 slots. Ashok taught heavily within the programme and inspired hundreds of students in the BIE and thousands more across the Bachelors of Arts to study Economics in order to understand the world.

Ashok’s decency, his humour, and his warmth drew students and others from all corners. And he had time for them all. To share a corridor with Ashok was to witness a continual flow of people to his office. There was no such thing as ‘office hours’. His door was always open. When time on campus ran short, he hosted groups, graduate and undergraduate, to his house. Young faculty were always welcome, and there was an open drop-in policy for all. His influence and popularity extended across the campus, bringing together a diverse group of scholars across multiple disciplines, again usually to his house. Most were, ostensibly, united by an interest in development and India. But mostly they were united by an interest in being with him.

Though he advised us all, he never sought to dispense advice. His goal was always to listen and to understand. Nobody came away from Ashok feeling misunderstood. No problem was too minor for his attention. No time was a bad time. For those of us who drew upon his wisdom continually, it was hard not to see him as a sage. And to many, he seemed a perfect human. But he never thought so. He was ridiculously humble. Grateful for all he had. Shocked at how good his life turned out. Amazed at his wonderful friends, and his loving family.

Though Ashok never thought anyone could be perfect, he did admit that, in special cases, and in narrow ways, perfection could be reached. He thought Ken Griffey Jr. had a perfect swing, Michael Jordan a perfect jump-shot, Sachin Tendulkar a perfect leg-glance, and Roger Federer the perfect forehand. But unwittingly Ashok himself had perfected one thing. To the many of us who could claim him as one, he was the perfect friend.

Ashok is survived by his wife Truus, his two daughters, Shasha and Shanu, and his three grandchildren, Lizzie, Elliot, and Claire.