Helping healthcare workers and local restaurants with one clever idea

UBC international economics student Patrisse Chan has taken these two simple facts and turned them into an online platform that allows Canadians to buy a meal from a local restaurant and have it delivered to staff at a hospital or care home.

Feeding Our Frontlines gives you a chance to support healthcare workers and the economy at the same time, with just a few clicks.

“There’s so much support for healthcare heroes and it’s well deserved, but people don’t always think about the struggling businesses in our economy,” said Chan. “In order for our economy to function, there needs to be transactions. Even if it’s just a $1 donation, it can and will make an impact.”

Chan had the idea while interviewing restaurateurs for her podcast, Rise Regardless. She was struck by their altruism, as many were making food donations to frontline workers despite taking huge financial hits from the decline in their own business.

“I thought that one person or one entity shouldn’t have to sacrifice itself,” Chan said. “There’s tons of help to go around. That’s where the idea came along and we started developing it from there.”

Chan collaborated with Eunice Wu, a student in UBC’s doctor of pharmacy program, and Zoey Li, an interactive arts and design student from Simon Fraser University. They worked full-time for two weeks—starting during final exams—to get the site ready for launch on May 5. Within 10 days of launch, they had raised enough donations to feed more than 430 healthcare heroes. 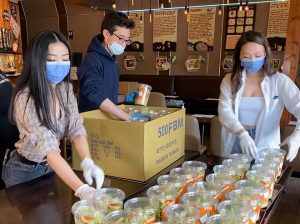 The students have recruited more than 40 restaurant partners in Vancouver, Calgary, Toronto and Montreal, and are looking for more. Participating B.C. healthcare institutions include Mission Community Coronavirus Centre, Lions Manor Long-term Care Home, BC Children’s Hospital and BC Women’s Hospital, to name just a few.

Jonathan Watanabe, business manager for Pokey Okey, was one of those guests on Chan’s podcast. His restaurants in Richmond and Burnaby are now participating, using the donations to cover food costs while paying for labour and packaging themselves.

“We’re pretty much operating at a loss, even though we’re keeping our people employed,” he said. “It’s a tough time for us because we’re not getting any walk-in customers, but we’re hanging in there. We really believe in giving back to the community, because we feel like we wouldn’t be where we are without the support of everyone around us.”

People can donate securely through Shopify and PayPal, and choose which restaurant benefits from their contribution. After PayPal fees are deducted, all remaining proceeds go directly to the restaurant.

Building Feeding Our Frontlines has given Chan a crash course in product management, which should serve her well as she works toward a corporate future in the tech industry.

“The bachelor of international economics program has been pivotal in my growth over the past four years,” she said. “The support from my professors, teaching us how to research and articulate our ideas based on research, and how to turn those ideas into reality—that has been super important for me.”

Chan hopes people stuck at home who feel powerless to help with the COVID-19 effort will recognize the power in numbers that a platform like Feeding Our Frontlines can provide.