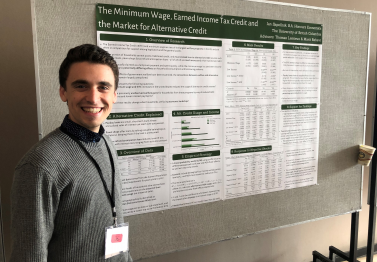 “I am very honoured and take this as a signal to keep engaging in economics research,” said Sapollnik. “I benefited tremendously from the guidance of my advisors, professors Thomas Lemieux and Marit Rehavi, as well as the support of my classmates. This project would not have been possible without them.”

Sapollnik was one of twelve undergraduate students selected to present their work at the conference. The award for best paper comes with a $500 prize.

Sapollnik’s paper focused on alternative credit sources, like payday loans and pawn shops, that are more costly than traditional bank loans. His research showed the usage of alternative credit has been reduced by increases in the minimum wage in the United States, but a refundable tax credit program called the Earned Income Tax Credit (EITC) had no effect on alternative credit usage. Sapollnik said the EITC and minimum wage often compete for policy support, so his paper contributes to broader literature on the two programs.

Sapollnik is headed to Princeton University to work as a research assistant at the Woodrow Wilson School of Public and International Affairs and has plans to pursue graduate studies.