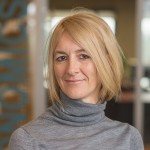 The major $5000 prize in economics recognizes the outstanding work by a researcher over the past five years. Some of Anderson’s recent work has focused on the role of dowries in establishing property rights for women in developing economies and how acquiring an education can strengthen a woman’s hand.

“I feel very honoured to receive this award and I am very grateful to my co-authors and to my colleagues at the VSE,” said Anderson, who is also a triple UBC alumna.

She received the award earlier this month at the CEA’s annual conference in Montreal.