A third-year dual degree student in economics and combined mathematics and statistics, Cheung tackled the topic of penny-rounding in Canada, asking the question: if rounding has a non-zero net effect, will rounding on groceries benefit retailers or consumers? 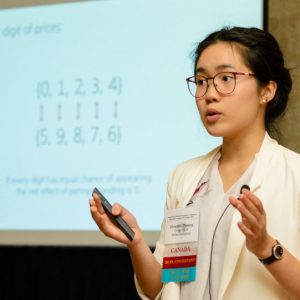 Christina Cheung presenting at the IAES Conference in Montreal.

“My study looks at when you buy grocery items in particular, depending on how many items you buy and the sales tax of the province you are in—how those two variables affect how your final bill rounds,” explained Cheung.

“If every digit has the same chance of appearing, then the net effect of rounding would be zero,” she said. “But when you go to a grocery store most of the prices end in nine, which means when we round things the prices might actually round up.”

Cheung chose to study grocery items since they are consumed universally, and therefore capture the entire population’s spending habits and preferences.

She said her findings show that penny-rounding “imposes a tax of $3.27 million Canadian dollars from consumers to grocery stores on a yearly basis in aggregate. That means that a typical grocery store would receive an additional estimated $157 in revenue just from rounding.”

Cheung worked on the paper during second year as a passion project outside of class, spending hours gathering data over winter break with the help of friends. Her research used over 18,000 price data, collected manually from three Canada-wide grocery store chains.

Cheung first presented her research at UBC’s Multidisciplinary Undergraduate Research Conference (MURC) last spring. Her winning paper, Eliminating the Penny in Canada: An Economic Analysis of Penny-rounding on Grocery Items, will be published in a future issue of the Atlantic Economic Journal.