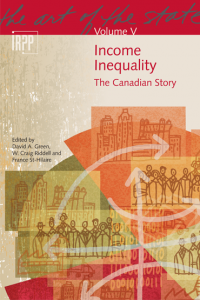 The federal government’s attempts to shift the tax burden from the middle class to the top 1% will not be enough to address rising income inequality, says a new book published by the Institute for Research on Public Policy (IRPP) in collaboration with the Canadian Labour Market and Skills Researcher Network. Based on extensive research on inequality trends and outcomes in Canada over the past three decades, the book sets out an ambitious policy agenda to deal with the problem.

Income Inequality: The Canadian Story, is co-edited by VSE Professors David A. Green and W. Craig Riddell, along with France St-Hilaire, VP Research with the IRPP. Additional contributors include VSE Professors Nicole Fortin and Thomas Lemieux.

“We have looked at this question from all angles and the bottom line is this: income inequality in Canada has increased substantially over this period, primarily due to the dramatic increases in income among top earners and the general lack of progress for the middle class and those at the bottom of the distribution. These trends are worrisome, especially given signs of decline in both income and intergenerational mobility over time,” says Craig Riddell. To read the IRPP’s full news release, click here.

Why is now an important time to tell this story of Canadian inequality?

Although income inequality has been growing in Canada since the late 1970s/early 1980s, there remains debate about the extent to which this a serious problem for Canadian society and, if so, what can and should be done about it. The debate has intensified since the 2008 global recession and financial crisis. In Canada the debate has been polarized and confusing – similar to the debate over global warming and climate change, with some denying it is happening and others arguing the world is headed for a disaster of epic proportions.

An important factor contributing to the polarized and confusing debate on inequality is the absence of a comprehensive, in-depth examination of the Canadian experience. This, and the absence of a consensus on whether rising inequality is a problem, lead to the CLSRN collaborating with the IRPP to carry out a major research program on income inequality in Canada. We hope and expect that this volume will advance our understanding about what has been happening and what some of the leading options are for dealing with inequality.

Who are Canada's top 1 percent?

Thomas Lemieux and I use census data from the period 1981 to 2011 to study the evolution over time in Canada’s top earners. Among the more interesting findings are:

What lead you to be interested in this issue as a focus for your research?

When I was a graduate student the study of income distribution was considered boring – one famous economist referred to this branch of economics as being “like watching grass grow.” The reason is that in the first several decades of the post WWII period, Canada’s economy grew rapidly and prospered, and the benefits of that growth were widely shared throughout all parts of the income distribution. So basically the distribution of income was very stable over several decades – nothing much was happening.

However, this situation changed dramatically in the past 3 ½ - 4 decades. Since the late 70s/early 80s the benefits of economic growth have been distributed very unequally. Real incomes of those in the bottom 90% have increased very little over this 3 - 4 decade period, and some parts of the income distribution have seen no improvement in their material well being. Real incomes of those at the top have increased dramatically.

For example, in my chapter with Thomas Lemieux we show that real incomes of Canadian workers increased by 3.5% over the period from the early 1980s to 2000. However, that growth was strikingly uneven: the bottom 90% of workers experienced growth of 2%, while real incomes of the top 10% increased by 75%. Those at the very top had even more spectacular increases in income – e.g. 160% for the top 0.01%. Having a society in which the benefits of prosperity are divided so unevenly is a serious problem, and may not be politically stable. This is why US President Obama called rising inequality “the defining issue of our time.”

Should government play a role in helping to solve the problem? How?

Yes – the government should play a major role. As David Green, France St-Hilaire and I argue in the opening chapter, the federal government in particular needs to be a major player.

One of the important themes that emerges from the book is that some of the potential solutions that are often advocated (such as making labour laws more favourable to union organizing and investing more in education) are unlikely to have much impact on inequality, at least using the types of policy approaches that have been employed to date. Simply put, changes at the margin to existing policies will have only modest effects. Based on the analysis of the various contributors to the book, and our own assessment of Canada’s experience, we propose a set of policies designed to make the total income produced by Canada’s economy shared in a more equitable manner.

Can we expect the private sector to contribute to solving this problem at all?

Yes – all parts of the private sector, including business and labour as well as think tanks and the media have important roles that they can and should play. Governments cannot be expected to make major policy changes to reduce the rate at which inequality is rising (possibly even reversing its increase) without a broad public consensus that this is a serious problem that requires action on many fronts.