Minet Prinsloo’s job requires her to see the forest for the trees. As an economist at Natural Resources Canada, she works to understand the big issues that impact Canada’s forest sector.

“I analyze the economic and social factors and related public policy issues that affect the forest sector across the country,” says Prinsloo (MA ’11). “I also look at how the forest sector fits with broader government priorities such as the clean growth and the trade agenda.”

Some of the more recent files Prinsloo has worked on have been the subject of widespread media coverage, including the softwood lumber dispute between Canada and the United States, and potential socio-economic impacts from species at risk regulation.

“I get to work on a lot of different topics and issues that affect Canadians,” says Prinsloo. “Every day brings a new challenge.” 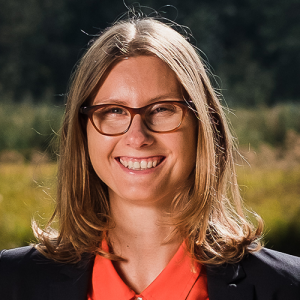 Prinsloo’s team provides analysis and recommendations to inform public policy decision-making. Given the complexity of many issues, she often works with industry stakeholders, other federal departments, like Global Affairs or Finance Canada, and other governments. As part of this work, she also reviews legal documents and helps government lawyers understand the industries and economic arguments involved in trade disputes.

In the recent case of the United States imposing antidumping duties on certain types of Canadian paper, including newsprint, Prinsloo helped to predict the potential impact on the market and competitiveness of Canadian producers. The U.S. International Trade Commission eventually overturned the duties.

Prinsloo says she made the decision to study at UBC for two reasons: location and reputation.

“The nature trails and the beach around campus were the perfect spots to de-stress and relax,” she says. “Academically, the professors took an active interest in my success and it was great to be able to interact with people from all over the world in class.”

Prinsloo sees her economics education as a toolbox, preparing her to tackle any problem.

“Economics is a framework you can apply to a lot of issues in a number of different roles,” says Prinsloo. “It’s a discipline that separates itself from other fields, both in terms of the kind of analysis it can provide and the various methods of investigation. The career options are wide.”

A career in government

After graduating from UBC, Prinsloo took some time off to visit South Africa, where she was born, before entering the job market. She joined the federal government through the Accelerated Economist Training Program, now called the Advanced Policy Analyst Program, a leadership training opportunity for new graduates to establish a career in government. She worked in four different departments on a variety of social and economic policy files and government priorities before joining Natural Resources four years ago.

Her advice to new graduates is to focus on communication skills in addition to their academic work.

“I think there’s an emphasis among students to focus on the subject matter they’re studying, whether that is economics, business, or science, and not enough emphasis on improving their communication or writing skills. Recent graduates who can articulate the knowledge they possess simply and clearly will have a competitive edge in the job market.”