Working for a cleaner future: Q&A with Susan Koch (BA ‘82)

It’s been a while since Susan Koch was a student at the University of British Columbia, but people on campus can still catch a glimpse of her whizzing by on her bicycle from time to time. The BA ’82 economics alumna often ends up back at UBC on long bike rides from Richmond.

Today, Koch is the chief financial officer for Carbon Engineering, a clean technology start up in Squamish, B.C. It’s here where Koch works with a team of scientists, engineers and entrepreneurs who hope to revolutionize the sustainability of the transportation sector.

She discusses the company, her career and UBC experience in a Q&A.

What is Carbon Engineering doing? 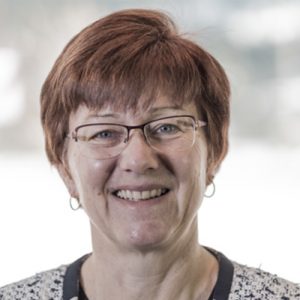 Carbon Engineering is working on a technology that extracts carbon from the atmosphere, recycling it into a synthetic fuel to power heavy-duty vehicles, such as trucks, ships and planes, without adding to the fossil sources of carbon dioxide in our atmosphere. This air- to-fuels technology essentially does what trees do (make a hydrocarbon), but at a much faster rate than geologic time. The company has a few years ahead of it to really perfect the engineering that’s needed to commercialize the technology. Currently, Carbon Engineering’s pilot plant can pull 1 tonne per day of carbon dioxide out of the atmosphere.

What does a typical day look like for you at your job?
Being a CFO at an early stage company involves a lot of hands-on work. I do everything from accounting to finance to fundraising, human resources and I.T. The other part of my job is being the credibility behind the numbers, so when the CEO talks with shareholders and investors, the finances presented are solid.

Carbon Engineering is the fourth pre-commercial clean-tech company you have worked for. What attracts you to working in startups?

We’re on the leading edge. It’s like you’re walking on a bridge while you’re still building it. That’s exciting. The other aspect I’ve really enjoyed is how much science I’ve been able to learn. At UBC, I did take some math and computer science courses, but never physics or chemistry. I’ve been able to take what I learned at UBC and add to it to have a broad understanding of both the economics and science of clean technologies. I can offer up the accountants’ version of nuclear fusion or the direct air capture of carbon while networking. People seem to enjoy that different perspective.

Favourite UBC memory?
Living on campus. The movie, Animal House, came out a month before I started university. It inspired a fun toga party in residence.

Koch is originally from Campbell River, B.C. but now lives in the Lower Mainland. She obtained her accounting credentials after graduating from the UBC Dept. of Economics, now the Vancouver School of Economics. Outside of work, she enjoys gardening, cycling, hiking and yoga. An avid reader, she is a member of two book clubs.